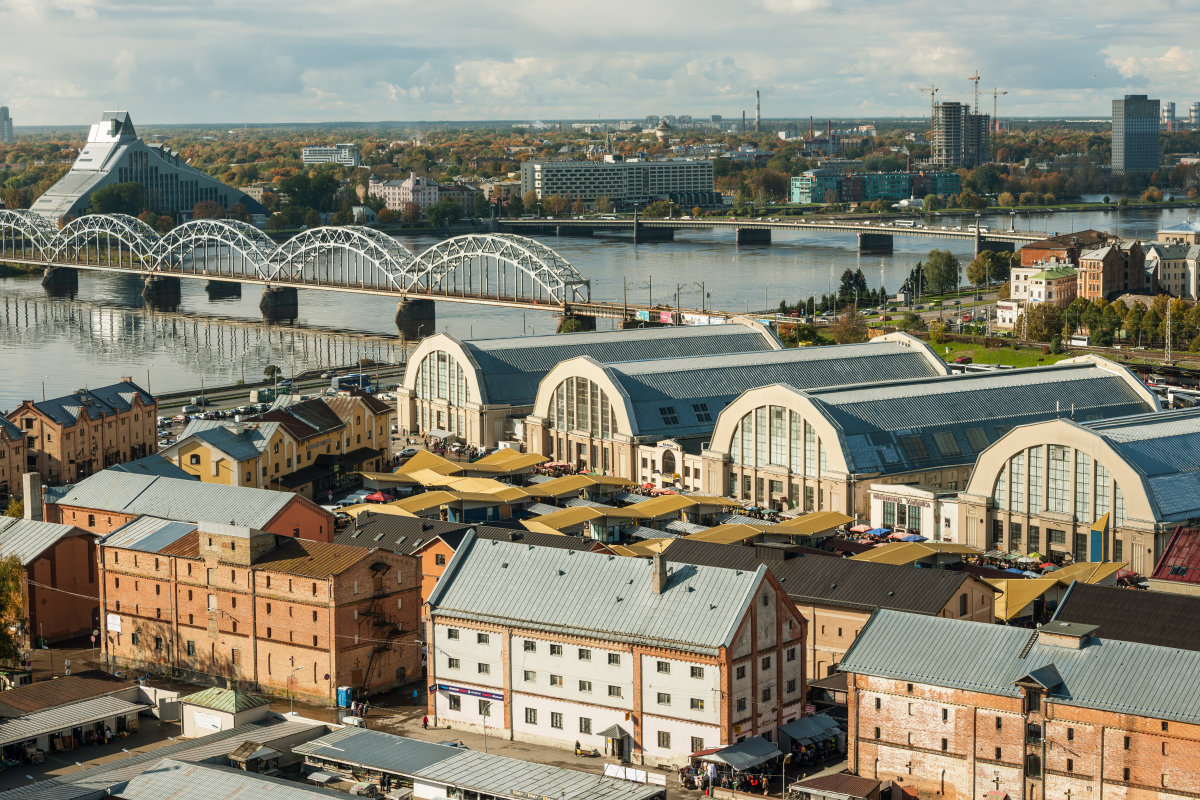 The Riga city leadership held the first discussion about the need for a main market way back in 1909, but WWI delayed fruition until December of 1922. The legislation was pushed through on construction of a central municipal food market as the existing one had become too small and limited. The job was completed in eight years.

Construction got underway in 1924, and the edifices used as the various pavilions, that give the Market its unique look, initially were built in Vaiņode (Kurzeme) as hangars for German army zeppelins. Before they were set in place, a two hectare large area – the size of a town – was constructed as a lower level with a walkway 337 meters long. 27 ice boxes accommodated goods up to 310.00 kg till 1938. A lift operated from the lower to ground level.

A grand opening to mark not only the ‘largest, but also most modern, and the best’ greeted the new Riga Central Market in 1930. The location – the heart of the city, often referred to as the ‘belly of the city’.

During the war, the Third Reich made use of two pavilions as an automobile repair shop, and nearby was a large area where firewood was stored. In 1949, Central Market was renamed the Central Kolhoz Market, and the Soviet press lavished much praise for it, calling it the best in all of the USSR.

In all periods of Latvia’s history, the Central Market has symbolized well-being and prosperity. Never has it been left wanting; here we have the widest array of fresh catch from Latvian waters, baked goods, fruit and vegetables, herbs and spices, honey, peanuts, almonds and more. The Market satisfies with a huge variety of household goods, cut flowers, potted plants, and homemade handicrafts.

One could certainly say about the Market: “that’s entertainment!” It takes you into a whirlwind – a gabfest with often raucous laughter, a multi-faceted world. Any detractions anyone may have vanish as it is perfectly clear that with each year the Market is more pleasant, tidier, forthright, responsible and modern. The shopping populace responds as they know that this is THE place for healthy and high quality food products, a place for impressions about Latvia’s gastronomic culture, also trade and retail.

Having weathered the rocky rebirth of capitalism, Riga Central Market is flourishing once again, attracting virtually one and all, because here, smack in the heart of the city, you can find and buy practically everything but especially products and produce straight from the farm.

In 1997, UNESCO honored the Market (as an integral part of Old Town) with a slot on the “World Heritage” List.

The Central Market has a magnificent aura, with its eye-catching pavilions and huge area. The grandiose pavilions can be looked upon as the framework that forms the shape and order of the Market. Of course, without the vendor-customer correlation, there would be no Market. As long as this correlation briskly exists, marketing remains as easy as pie and no winds, no rain or cold can hamper it.